I remember much of the incident clearly although not so much about the game it self. The last match of the season was played on a beautiful spring afternoon the mood of the fans jubilant even though the eventual 1.1 draw uninspiring. Our FA cup final match against Tottenham Hotspur was only one week away. Brian Kilclines first half free kick hammered the back of the back of the net, a classic goal now long forgotten.

At 4.48pm the referee blew his whistle and a friendly crowd congratulating the players invaded the pitch. I was amongst them. We the fans wanted to see the players and soon enough our hero’s  appeared, the mood amongst the fans always good natured although technically maybe we should never have been there.

A few minutes passed before mounted police arrived from King Richard Street end I’m not sure how many, maybe only a couple but one of the officers rode his horse straight into the middle of the happy supporters immediately causing panic.  I remember wondering what was a police horse doing in the middle this crowd, this was not a riot situation there really was no need for intervention of this kind. Then it happened.

I saw the horse kick back it was frightened and a young lad in a wheelchair got knocked over and for moments was under the horses legs realising what had happened I saw the look on the officers face he was also panicking. People started screaming, I starting shouting eventually the anger got directed towards police, “what a fucking twat, what the fuck was he doing there in the first place”. It was then that a friend I had travelled to the game with quietly and reflectively questioned “shouldn’t you be taking photographs of this”.

I had one camera with me; a Praktica MTL 3 with a 135mm portrait lens bayonet fitted. Knowing I was too close to the action I had to run along the pitch up towards King Richard Street to distance myself from the subject in order to have any chance of shooting a usable image. I was so angry I kept shouting “you fucking idiots, you stupid cunts” which I directed towards the nearest police officer in ear shot. I deeply regret using obscenities against these officers now; it really was the fault of the officer in charge who was stupid enough to use police force when force was not necessary. The crowd would have dispersed peacefully in its own time.

Although I had been working on my local newspaper only for a number of months I was aware I had missed that day’s deadline for ‘The Pink’, our Saturday evening sports paper. I  headed back to our offices in corporation Street on foot up the old metal stair case into the old darkrooms where our team of photographers were busy developing and printing that day’s sports photographs. I developed my roll of film on a plastic spiral in deep tanks, 7.30mins in D76, not knowing if the two frames I had shot were any good. I said nothing of the incident until I knew I had an image. As it turns out one frame was sharp, the other photographers looked at the frame took it off me then printed it, even congratulating me, they had left the match early missing the story and picture. 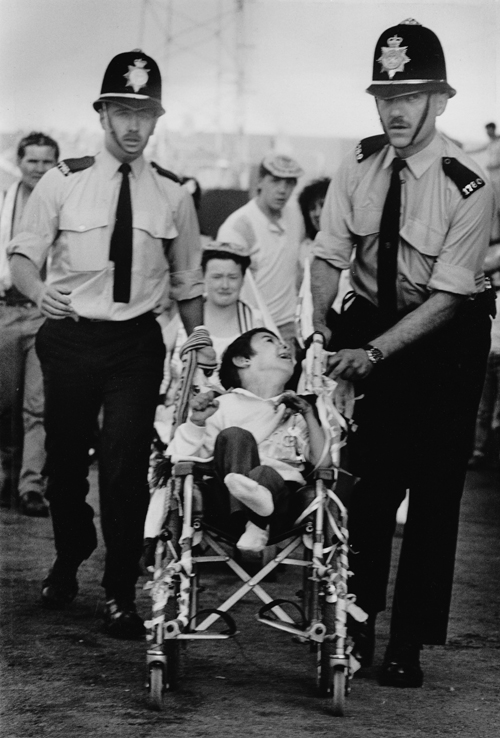 The photograph made the front pages of the newspaper on Monday lunchtime and by evening was being shown on local BBC television news programmes. In the short term was a star it seemed, although I was a now star who was equally deep  in the shit with my local constabulary.

A few days passed and the local West Midland police force had been forced into a grovelling public relations photo call inviting the young lad and his family back to Highfield Road to stroke the same police horses that only a few days before had knocked him down. I remember at the time wondering if I had played such a part in recording this story how come I hadn’t been invited.

A few weeks passed by and  I accompanied my newspaper editor Barrie (with-an-e) Clark (with-out-an-e) to a lunchtime reception hosted by Lord Mayor Winnie Lakin at Coventry council house. During the function I was approached by a well spoken gentleman in extremely smart police uniform whom when I was introduced lowered his mouth towards my ear and whispered questioningly and I felt intimidating “you don’t like the police very much do you”? When I asked Barrie who this man was he replied, that’s Geoffrey Dear, the chief constable, followed by “I see you’ve been noticed”.