Whilst visiting pilgrimage sites in India I always start my day eating an omelette that the chef makes using two eggs and always comes accompanied by two small slices of slightly sweet square toast (separate butter). The omelette arrives laced with fresh green chilli which helps to wake the sleepy morning tongue and it is a healthy and filling breakfast option when there are no pigs living nearby  to supply the protein. I prefer eating at Non Vegetarian restaurants in India though I do enjoy vegetarian food sometimes. One would have has to force me  kicking and screaming into Pure Vegetarian eateries.

Whilst staying in some of the more devout Hindu places of pilgrimage on the temple town circuit, sometimes even finding eggs can prove problematic. When you do eventually stumble across the odd egg or two they are offered to you by the waiter with a secretive whisper in your ear and then served to you quietly in the corner of a room out of view as if they are illegal drugs or smuggled alcohol and yes I am aware of local sensitivities concerning the consumption of some food types but I learned many years ago in India ‘Sab kuch milega’. Or as the Hindi saying transcribes in to English ‘everything is possible’. With that said and as a general rule of thumb the more sacred the town you find yourself eating in the less likely you will be able to find a full English breakfast and yes you can get ‘full- English’ in much of India. Thankfully India absorbs cultures and caters for everyone.

The days always start slowly in India, boys and girls in smart uniforms brush their teeth from outside water taps before heading off to school whilst soapy men squat next to metal buckets that clank together noisily as their vigorous body washing begins and as is repeated in countless other towns across India, cows that at first glance appear to belong to know one roam dusty streets where they rummage through rubbish collection points burying their snouts deep into an unhealthy combination of plastic bags and rotting vegetation where they search for any left over morsel of food they can find.

For the last couple of days I had been enjoying the company of a young British woman called Jessica who was heading in the same direction as me. We met each other at Bangalore city train station whilst buying tickets for Hospet and after our over night train journey we then shared the cost of the 13km auto-rickshaw ride to our final destination of Hampi where we then shared a small room, it makes perfect economic sence!

Hampi is an ancient temple town that is located on the banks of the Tungabhadra River in the southern state of Karnataka. It is not a well-kept secret, it is visited by thousands of foreign and local tourist who travel here each year to loose themselves in the faded splendour of its temple ruins, ruins that were painstakingly carved centuries before out of the moon-like boulder strewn prehistoric landscape.

I had travelled to Hampi once before and to get lost amongst its lunar panorama is reason enough to visit again but to stumble across and then climb up hidden ruins that spread out for mile upon mile is also unforgettable and well worth a second look. That morning before we started our day’s exploration we walked a short distance from our guest house and we found a typical family run restaurant called Nandi named after Shiva’s bovine chariot. Jessica and I entered through the open door and we sat down on one of the plastic chairs ready to order our breakfast. The restaurant was empty, we were the only customers.

Tourist restaurants across India that cater for the long-term European traveller are cheep and cheerful simple affairs, stone floors plastic chairs and tables, a fan that may or not work. Found hanging from walls on loose hooks will be framed photographs of deceased relatives, images of Indian Idols or any number of Hindu gods, whilst slowly burning incense sticks perfume the air. Adorning another wall will almost certainly hang a large out-of-place plastic banner with a either a photograph of snow-capped Himalayan Mountains or a beautiful Goan palm fringed beach scene or a soaked Keralan house boat caught in a monsoon downpour, photographic clichés that help to reinforce the Indian tourist departments’ ubiquitously used slogan ‘Incredible !ndia’.

Jessica and I waited for the waiter…. And we waited a bit longer. We were in no rush and we sat talking together patiently. After about ten minutes the waiter appeared from the kitchen door and when he finally noticed us he made his way from behind the counter the short distance to our table. He was a small middle-aged man and he was wearing a clean and freshly pressed white shirt and black trousers; he looked slightly surprised to see any customers at all. I knew what I was ordering so when he asked “what would you like to eat sir?” Men in India are always served first; I replied straight away “I will have an omelette with toast please and a coffee, thank you.” And Jessica said “and I’ll have the same please, coffee also.”

The waiter wrote the simple order down onto his note pad he politely nodded his head towards us thanked us both very much and he walked back behind the counter and disappeared from where he first came. Jessica and I waited and talked. We waited and we talked a little longer. Jessica and I were in no rush we carried on chatting until a full twenty minutes had gone by without either of us catching a glimpse of the waiter again. And then, an extraordinary thing happened. 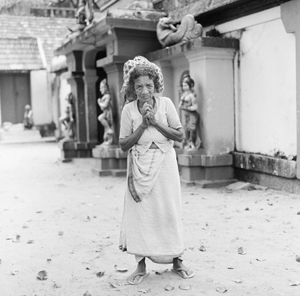 A large white bull that had been wondering around outside the restaurant walked in through the door. The bull made its way to our table in the middle of the room, it stopped for a few seconds checking out the empty restaurant, it turned its head from side to side ignoring myself and Jessica before it continued on its way towards the counter where it stood and waited……… It waited some more.

The bull stood quite still, its only occasional movement was flicking its tail from side to side to remove flies that had been drawn to its shitty arse hole, this twitching movement allowing the occasional rear glimpse of its magnificent pair of low hanging testicles.

The waiter appeared from the kitchen door and when noticing the bull he immediately turned around and doubled back on himself into the kitchen. The bull waited patiently moving only to scratch one of its horns on the counter top. Sounds of a knife Chopping on a wooden board came from inside the kitchen and five minutes passed before we saw the waiter again, when he did eventually returned from the kitchen he was carrying a small mountain of mixed salad that was piled high on a shiny steel platter.

Having travelled in India for a number of years I explained to Jessica that once whilst on an increasingly desperate hunt for Imodium tablets I had stumbled across a Cow that was lying down inside a chemist shop where subsequently it transpired that it was allowed to escape the scorching midday heat on a daily basis, but that was in the Holy city of Benares and nothing surprises me in the Holy city of Benares but until this point in my lengthy travels across this great country I had never come across a bull being served a mixed salad in a restaurant whilst I was seated and waiting for my breakfast. 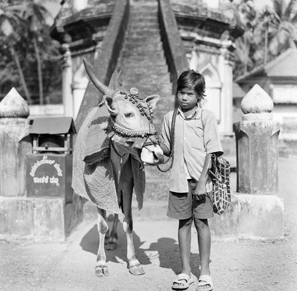 The waiter placed the mixed salad on top of the counter infront of the waiting bull, he then turned around and went back through the door disappearing once more into the kitchen from where he came. Jessica and I then watched the bull as it slowly munched its way through the fruit and vegetables of which for any bull anywhere in the world was a very healthy start to the day.

The bull cleared the food from the metal dish with its dextrous probing slimy black tongue making double sure that it had consumed every piece of vegetation the waiter had served onto that shiny plate. Once happy all of the food was finished the bull did a remarkable three-point-turn managing to avoid every empty table and chair in the restaurant. The bull walked straight past where Jessica and I were sitting ignoring us once again and missing us both by inches, It then sauntered out of the restaurant. There was a short silence between Jessica and I, the sort of silence that occurs after all remarkable events.

I looked at Jessica  as much to break the silence as for anything other good reason for speaking and I said  “I wonder where our Coffee is?” She replied agreeing with me that it seemed to be taking a long time “Yes, it has been a while hasn’t it.” Jessica and I sat there waiting.

It was another ten minutes before we saw the waiter again and when he did return from the kitchen both Jessica’s patience and mine had worn a little thin the restaurant was empty and we were desperate for our cups of Coffee. When I saw that the waiter was not even carrying our coffee let alone the two omelettes I felt I needed to make a small complaint. I raised my hand in the air like a child who trying to grab the teacher’s attention and I pompously said “excuse me, now I’m not being funny but you took our order down over thirty-five minutes ago and it was only for a couple of cups of coffee and two omelettes you are not exactly busy and we haven’t had either. A bull wonders in off the streets it walks straight to the counter and you serve it almost immediately.”

The waiter looked directly towards me and he replied politely in a calming hushed ascetic tone “Yes sir that is true but that bull comes in here to eat everyday.” With a slight smile and half an Indian head wobble he turned around and headed back towards the kitchen pleased I am sure that he had reminded a Gora that being a tourist and human does not mean automatic preferential treatment over regular customers especially when in temple towns and the name of the restaurant is Nandi.