I was blinded by ignorance when I visited Haiti. It was the middle of July 1997 and I believed that Haiti  was just another poor West Indian country, indistinguishable from any other  of the Caribbean nations that I felt would all be very similar to each other. Even though Haiti was absent from all of the Caribbean guide books I still felt that Haiti would be a country worth exploring. The only true fact that I knew about Haiti that was that it was one half of the Island of Hispaniola. Of course I had heard something about Haiti’s crippling poverty and the Islands infamous association with the cult of Voodoo but in the main I knew very little.

At first glance as I passed through a wooden shack that was the customs office at border control and we made our way tentatively across a short stone bridge that crossed a tiny polluted river from the Dominican Republic it was immediately apparent that Haiti was the impoverished eastern side of that one Island. The WE had flown into the Dominican Republic and was by contrast, although it was still not a 1st world nation it was affluent and comfortable in comparison to what I could see in front of us.

Reluctantly climbing onto the back of a lorry alongside my then girl friend was the only choice of transport made available to us and this vehicle became the mode of transport as we ventured into the country bouncing for hours along a deserted dusty highway. As we headed north towards the town of Cap Haitian I had wondered why so few trees grew along side the roads or in the hills we could see in the distance and why a cow that lay dead in a field at the side of the road was missing a hind leg and why a young man who was standing next to me in the cramped confines of the open top lorry was running his four finger slowly across his throat gesturing to me that I too along with that cow would soon be dead.

I learned quickly in the two weeks that I spent in Haiti. It was the first Caribbean country to gain its independence when some of its black and mixed race population began a revolt and fought for their freedom side by side with African slaves freeing themselves from their French colonial masters becoming the world’s first black led republic in 1804.

I was to learn that 90% of the rain forest had been destroyed, it had been used for building material and fire wood over the course of the previous two centuries and it had never been re-planted. I was told that the cow had probably been stolen and slaughtered and the rear leg was easier to steel and take home and eat than the entire cow and of course the bones then easier to dispose of. 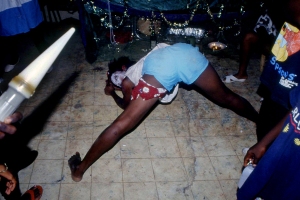 Whilst we were out walking close to Cap Haitian we stumbled upon a young man, fourteen years of age, who was pushing his bicycle along a coastal path his name was Philippe Allan, all Philippe Allan wanted from us was to practice his English. Philippe lived with his father and his younger sister behind the police station and Jail in Cap Haitian, Philippe told us that his mother has been killed by witchcraft a couple of years before. Although family life was a struggle for Philippe he was always a cheerful happy young man. We bought him dinner one day and I have NEVER seen any one eat as much food as fast in my life ever before. 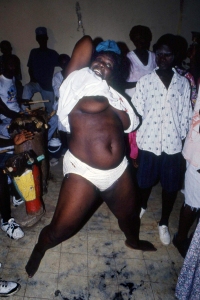 We spent most days of our two weeks with Philippe and it was Philippe who one when I enquired where the drumming was coming from took us on the spur of that moment to two separate Voodoo ceremonies. It struck me a quite strange at that time that although every body we met were struggling to make a living there was no shortage of alcohol on he tables, that was one of the most interesting if uncomfortable nights of our stay in Cap Haitian and when we were asked to leave the party because of the excessive sexual overtones in hindsight I was really quite pleased. There is nothing worse than a western white male being forced to dance with drunken Caribbean women who were rubbing whisky into their Vaginas in the middle of the dance floor.

Over the course of the last 16 years and since I first bumped in to Philippe we have stayed in sporadic contact, a few letters sent between us at first then a few phone calls and finally internet contact and we could then speak more freely. Philippe got a position working for the United Nations, where he was working when the terrible Earth quake struck in the year 2010. The last I heard of Philippe he had been sent for training in the United states and he told me that one day he expected to become prime minister and one of his first duties was to re-plant Haiti.

The church on the hill